The overall variability between the meters was roughly ±11 %, and two of the meters -- both from the same manufacturer -- showed major bias.

Chris had been using one of those meters to calibrate his CGM and consistently found that his lab-measured A1C would come in a full percentage point higher than his CGM average would predict (e.g., the meter-calibrated CGM data would correspond to an A1C of 6%, but laboratory-measured A1C would actually be 7%).

As someone who wears a CGM and always strives to achieve an A1C of ~6.0% or lower, this post freaked me out.

If I'm calibrating my CGM with a meter whose results are always off by that much... how can I be sure about reaching my targets?!? But I was also skeptical when I saw Chris' post, because my A1C has always matched my predictions (based on my CGM average). So, I decided to run my own test on 10 popular meters from various manufacturers.

Much to my relief, all 10 meters produced very similar results for each blood sample, with an overall between-meter variability of just under 6%.

Below I describe the test and discuss the results. And, in another post, I explain some reasons why your average BG on your meter might not always correspond with your A1C results. (Key point: It doesn't necessarily mean your meter is bad!)

These 10 meters varied in age and wear. Some were old, some were new... one was my own personal meter that I used to calibrate my CGM and make mission-critical decisions each day.

All of them passed their respective control solution tests, so it's safe to assume that they were in good working order. I tried to match the testing method employed by Chris (author of the original post) as closely as possible.

Eight rounds of testing were performed over the course of 24 hours according to the following procedure:

BG Results For Each Round, Compared 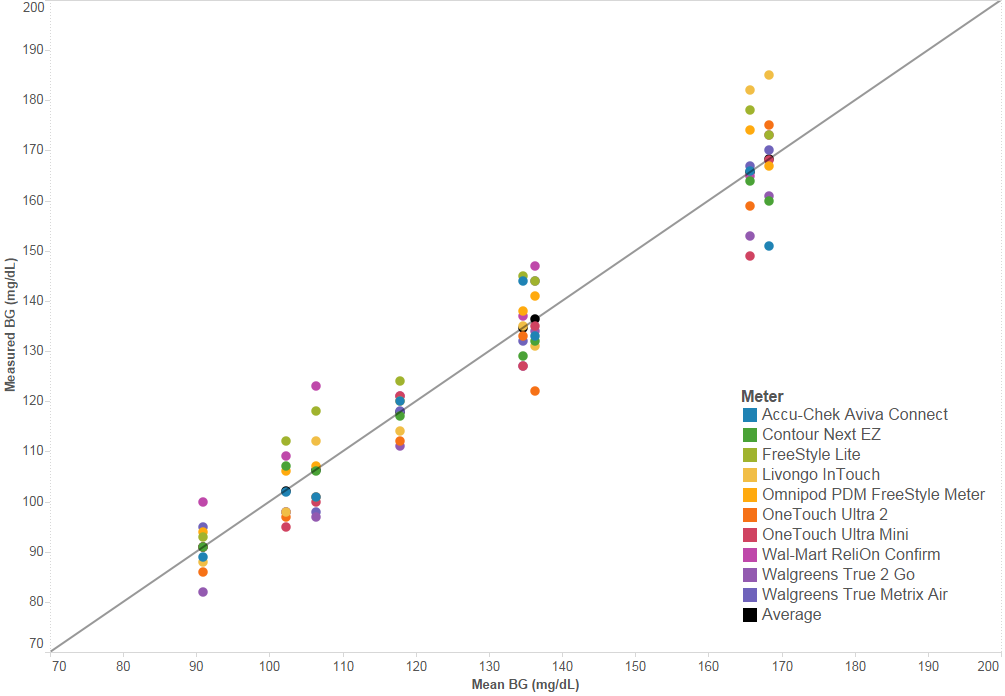 Unlike Chris, I didn't have an alarming spread in my results for any round. The overall between-meter variability ("% Error", or "%CV" for you stats folks) was only 6%.

In plain English: My treatment decisions wouldn't have varied much at all, regardless of the meter I was using.

I was relieved to see that even if I took a correction bolus for the maximum BG of each round, I still would have been brought down to a desirable blood glucose level.

For example, take Round 1. The highest reading I saw was 182 md/dL, and I'd take 1 unit for that. Even if we assume the true glucose was the lowest value from that round, 149 mg/dL, I'm still in good shape taking 1 unit because I'd only go down to ~70 mg/dL.

What does this mean for A1C?

To figure out what this means for A1C estimates, let's take a look at how each meter's average value over the 24 hours of testing compares with the overall average across all meters.

(NOTE: I realize that the average across all meters may not accurately represent true A1C, but this comparison is useful to show that, no matter what meter you use, you're getting roughly the same results for averages and, thus, roughly the same estimated A1C.)

The average blood glucose (BG) for each meter (solid gray line) was pretty close to the overall average (dotted line down the center), with the greatest deviation at around 6% (FreeStyle Lite & Walgreens True 2 Go).

This means an estimated A1C calculated based on the average value from any of these meters would be roughly the same.

For example: If your average blood glucose on your meter were 154 mg/dL, that would translate to an estimated A1C of 7.0%.

I think most of us would agree that this is an acceptable degree of variation between estimated and actual A1Cs.

* Important note: This is just based on the data I collected for the specific meters I had in my possession. I can't say whether these trends would be true for all meters of any particular brand that I tested.

My Own Experience With Self-Measured BG Averages & A1C

My CGM averages have always been spot-on when it comes to predicting A1C. Last Summer & Fall, I was using the Omnipod PDM FreeStyle meter (same one tested here) to measure my blood glucose values & calibrate my Dexcom CGM.

And this is pretty much how it's always been for me. Not the A1Cs -- I wish! -- but the match between estimates and actuals. ;-) I've never had any reason not to trust my BG meter readings, because the results always lined up.

BUT I do want to take some time now to explain that even if the numbers don't line up, it doesn't necessarily mean your meter is to blame...

READ: Why Doesn't My Average Blood Glucose Match My A1C?!

What about the post that started all this? Why were those results so off? 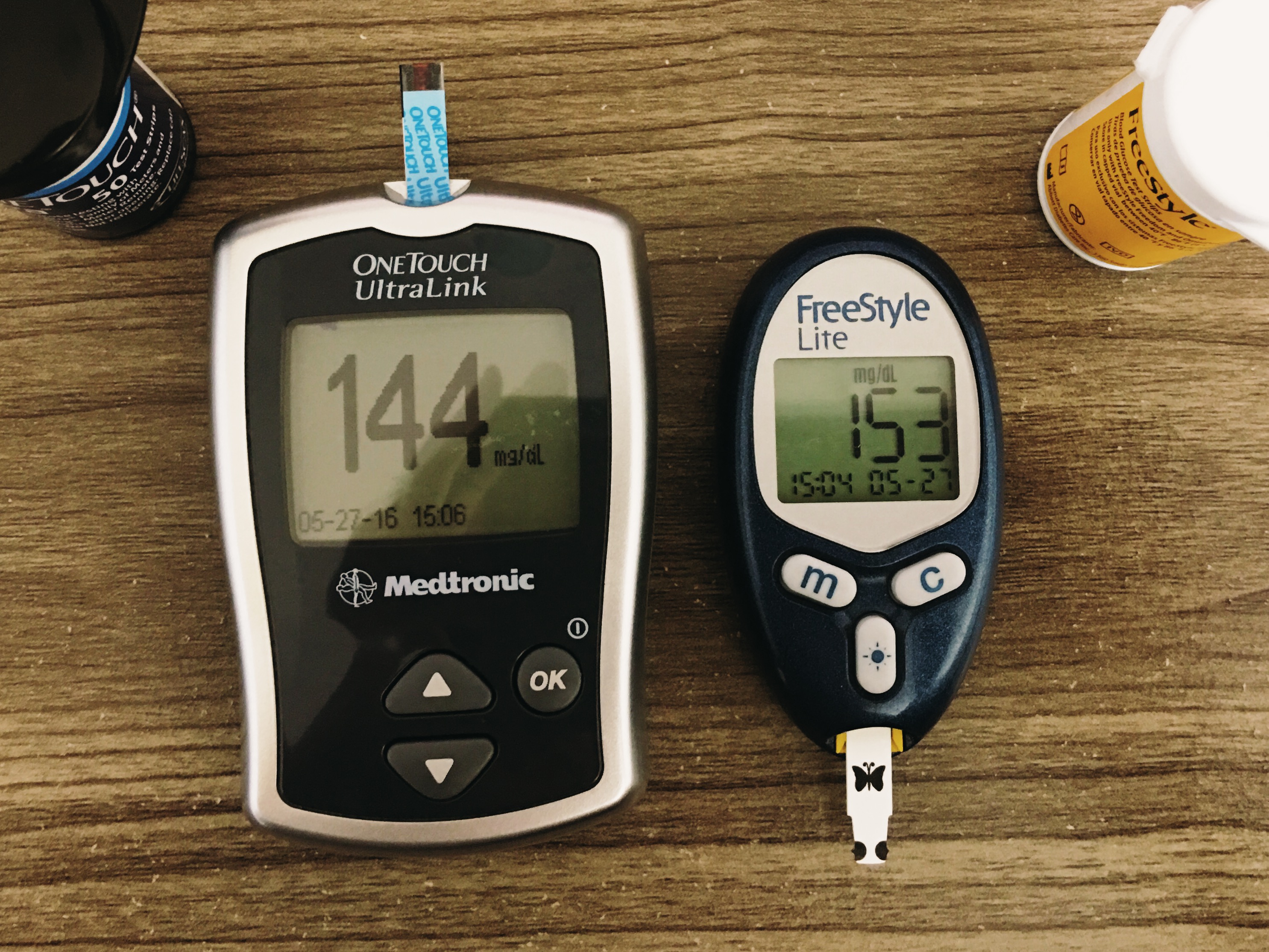 Well, the truth is, I don't know. I actually own the meter that Chris uses, OneTouch UltraLink -- I used it for ~4 years back when I was on a Minimed pump.

Unfortunately, I didn't have it with me at the time of this experiment, but I've tested with it a bit recently, just to see... And the results are generally within 10 mg/dL of my FreeStyle Lite readings!

So, I'm not sure why Chris' results were so different. He's been using his OneTouch UltraLink for about 7 years, and mine only got about 4 years of use before being carefully stored at my parents place with all my other diabetes "antiques." I wouldn't be surprised if after a significant amount of wear, these things just don't work as well. However, that doesn't explain why some of the other meters also deviated significantly from the mean glucose value...

It may be the test strips... 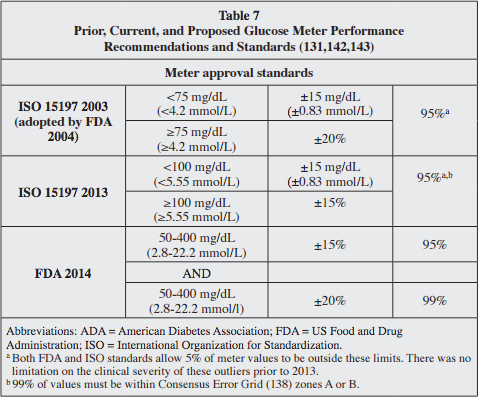 GM Consensus Statement, Endocr Pract. 2016;22(No. 2) The FDA requires that all new meters meet particular standards (shown here in Table 7), but once a meter is approved, the FDA does nothing to monitor accuracy. This is significant because, although the meters may have functioned perfectly when approved by the FDA, that was with a particular set of test strips.

Test strips can vary from batch to batch.

Test strips contain an enzyme that converts glucose into an electrical current that runs through the test strip and is read and displayed on your meter as a glucose concentration.

Enzymes are proteins and can breakdown due to humidity, temperature, and many other factors. So, differences in the environment in which the test strips are manufactured, stored, and used can lead to differences in the blood glucose measurements they provide.

Those differences may be OK -- the blood glucose values provided by these strips may still fall within the FDA's standards -- but, when we are comparing one batch of strips to another, things can get hairy...

Even though each of these batches of strips might have an acceptable difference from the true BG value, there is a 20% discrepancy (bias) between them. The differences could be clinically significant, especially when combined with a 7% random error on top of the 10% systemic bias.

So, where does this leave us?

More testing should be done! I feel pretty good about meter accuracy based on my own experiment and personal experience, but I'd feel even better if more people conducted similar experiments and got similar results.

Results like Chris' are scary -- they make us feel like no matter how hard we try we may still be missing the mark. And the consequences go beyond the emotional toll -- meter and test strip inaccuracy may lead to results that fool us into thinking everything is A-OK, when it's really not.

Bottom line: we need to be able to trust the devices we use to make critical decisions about our health every day. If meter accuracy really is an issue, it needs to be addressed right away. The Reason for COVID-19 Severity

It’s the elephant in the room. It’s what no major news outlets are willing to discuss. But it’s the most important part to understanding COVID-19.... What Is Clean-Crafted Wine?

Did you know that the average mass produced bottle of wine can contain up to 16 grams of added sugar? That’s more than a glazed...