When Women with Diabetes Are Shamed for Having “Big” Babies “At birth, the average baby weighs about 7.5 pounds, and 95 percent of newborns will be between 5.5 and 9.5 pounds,” says What to Expect. Despite this wide range of “normal” birth-weights, women with diabetes (type 1, type 2, and gestational) are routinely shamed and guilt-tripped for having a baby over 8 pounds. In fact, throughout the 9 months prior to the baby’s birth, pregnant women with diabetes are lectured over and over and over at just how fat their baby might be if they don’t achieve "normal" (read: non-person-with-diabetes [PWD] blood sugars). This constant barrage of lecturing and shaming isn’t necessary, logical, or fair for three reasons.

1. Why should a woman who has been diagnosed with diabetes of any type be expected to achieve non-PWD blood sugars? 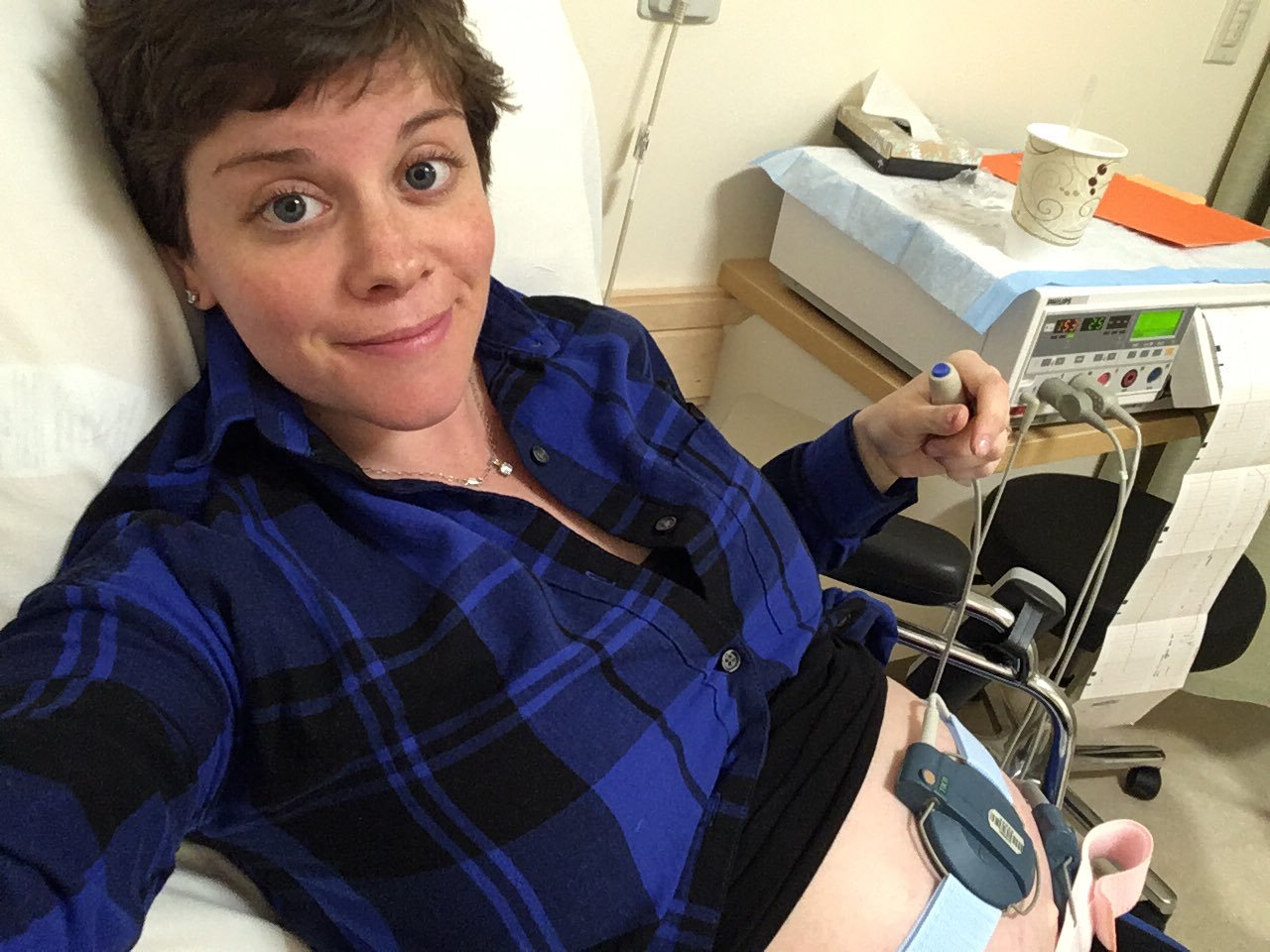 It’s only logical that a woman with diabetes is going to have higher than “normal” blood sugar levels because her body is struggling to produce adequate amounts of insulin, amylin, and glucagon. That’s three malfunctions in her body that are going to inevitably affect the size of her baby. My A1C was between 5.1% and 6.4% for the entirety of both of my pregnancies. Yet, I was still scolded for any imperfect blood sugars that appeared on the downloads from my meter! What this really revealed was how little my healthcare team really understood that something as wholesome as an oversized apple can cause a blood sugar of 200 mg/dL (11.1 mmol/L), because I can’t perfectly estimate the exact carbohydrate quantity in that apple. I expect mainstream media to think that only things that raise blood sugar in people with diabetes are doughnuts and cupcakes, but I expect my healthcare team to know better; to know that a great deal of my overall blood sugar levels can’t be perfectly controlled.

My daughters were born weighing 8 lbs., 11 oz., and 7 lbs., 11 oz. Both were well within the range of “normal.” Oddly enough, I was routinely told both before and after they were born that they were “big babies” because of my diabetes. 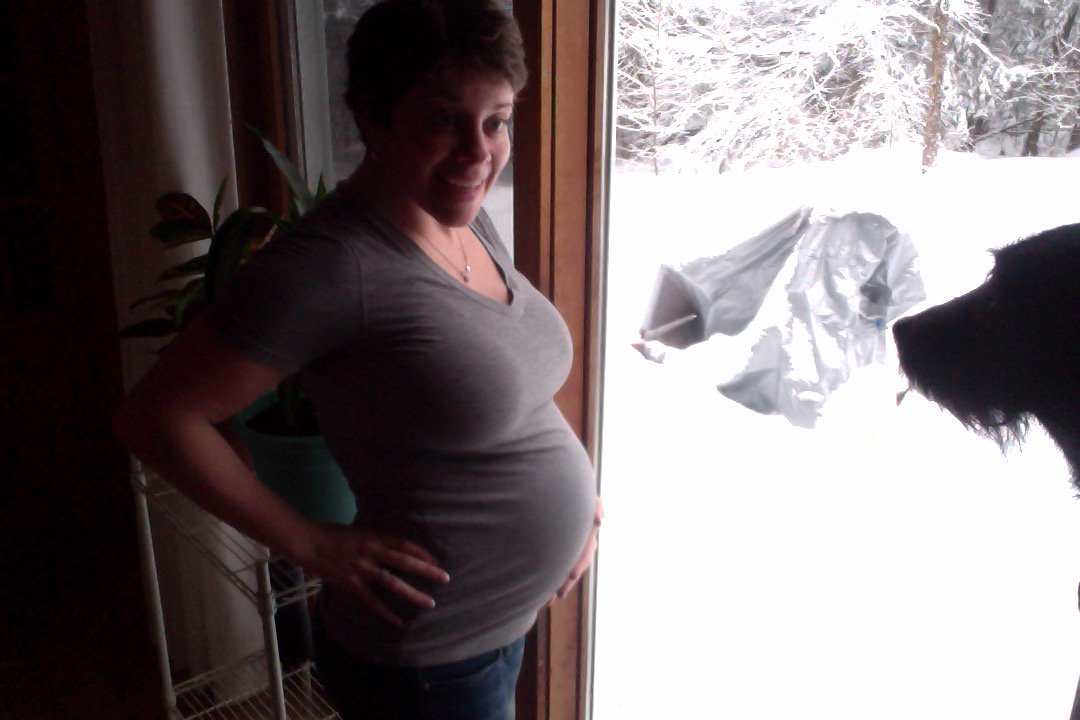 The genetics of the babies in my family (and my husband’s family) didn’t stop doctors and nurses and ultrasound technicians from lecturing me. My twin brother and I were born a month early to a non-PWD mother and we were still both 6 ½ pounds! My other brother weighed 11 pounds when he was born, and my husband weighed 10 pounds when he was born! Even though family birth-weight trends are a known contributing factor to the size of your own baby’s birth-weight, women with diabetes are told their babies are big, likely due to their imperfect blood sugars. Three of my best friends gave birth to their own children within the same 3-year window when I gave birth to my own children. My children’s birth-weights were less than 2 out of 3 of my friends’ children’s birth-weights. Yet, they were told their baby’s weight was normal, while I was told my children’s weights were the result of my diabetes.

3. Pregnant women with diabetes are told by dietitians to eat a diet that isn’t actually going to help reduce their blood sugars.

And they are rarely given glucometers to actually observe their own levels! This is particularly true for women with type 2 and gestational diabetes. Instead of being advised to reduce the carbs in their diet and focus on an overall lower carb diet, they are told to eat as many as 40 to 60 grams of carbohydrates per meal and 15 to 30 grams of carbohydrate per snack. If you’ve lived with diabetes long enough, you know that that amount of carbohydrates is going to spike your blood sugar tremendously. It doesn’t matter if those carbs are coming from whole grain oats or a bowl of ice cream -- both sources of carb are going to rapidly raise your blood sugar. In fact, a bowl of wholesome brown rice can be more damaging to your blood sugar than a bowl of Ben & Jerry’s ice cream because the fat in the ice cream slows down the digestion far more than the few grams of fiber in the rice does. This means that not only are pregnant women being scolded, shamed, and blamed for their baby’s large birth-weight, but their healthcare team is giving them nutritional advice that is most likely going to raise their blood sugars and lead to a larger baby. This poor advice is largely the result of traditional healthcare methods and an overall resistance to accepting the fact that carbohydrates of all kinds do raise blood sugar levels. 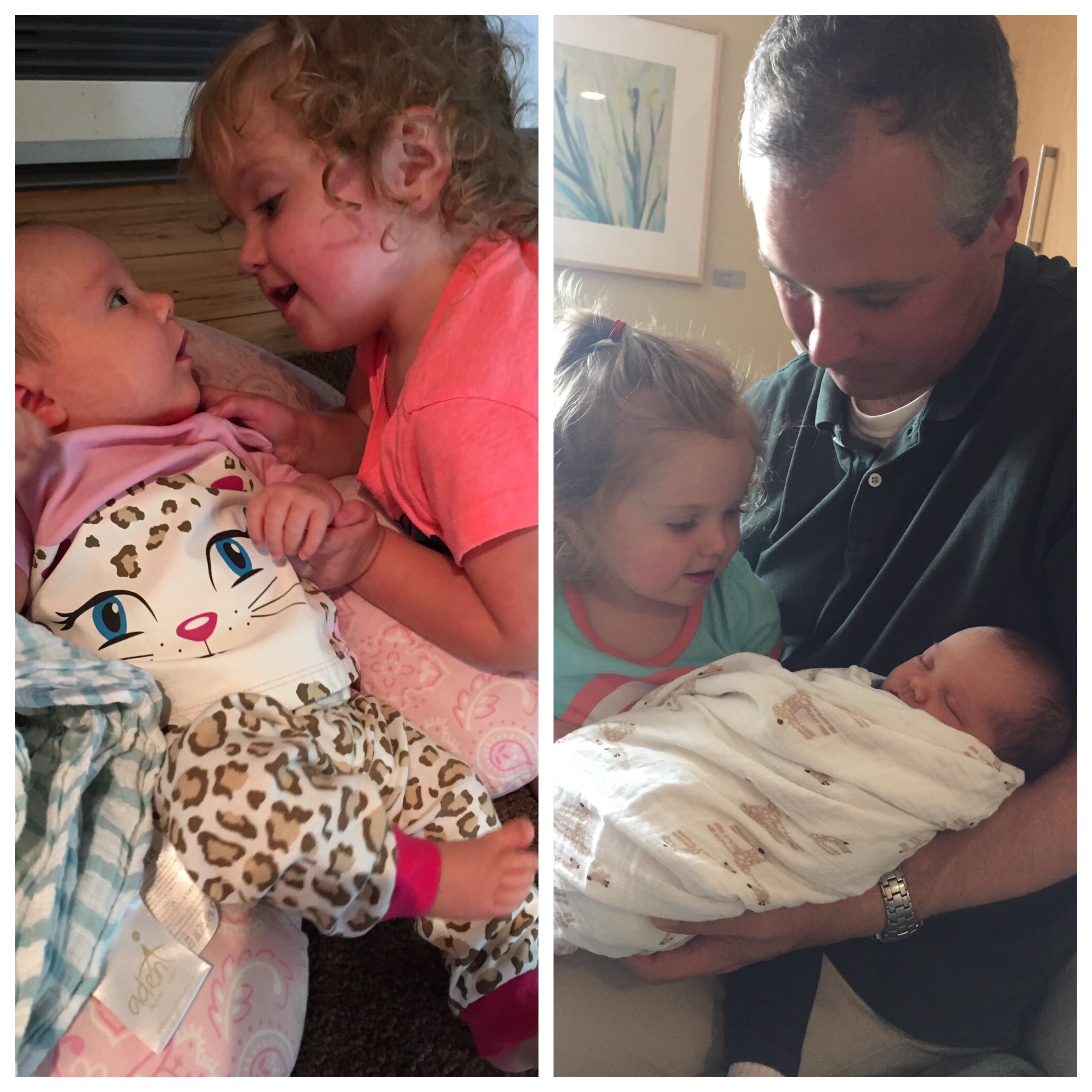 Mothers with Diabetes Speak Out

Mothers with diabetes spoke out on Twitter when asked if they were shamed or scolded for having a “big” baby:

"Not shamed so much as worried I was going to have a monster. 3 weeks early induced labor for 34 hours & told I was going to have an emergency section as I could possibly have a 13lb baby! Did they not know that 34 hrs earlier??? Best contraceptive ever. And she was only 8.8lbs.” @ShivGaffney

"Had an OB specialist in the joint diabetes + antenatal clinic tell me at 34wks that even with an A1C of 5.5, as I had, it was just more common for women like me with T1 to have big babies - when the weight prediction was 8lbs.” @Melissa_Writes

"1 week before my 8.5-pound baby was born, my doctor took his measurements and completely shamed me about being a pregnant diabetic. He told me I never should have gotten preg & that I could kill my baby with 1 high BG. Berated me until I was hysterical. And THEN when I sent him a log of my BG, insulin, and medication doses and changes, he called me and said ‘everything looks great!’  Never before nor since have I EVER been as livid with a doctor. Seriously not cool to talk to a 38-week pregnant woman like that. The Dr. told me my baby was ‘macrosomic’ and I should never have conceived knowing I was diabetic. He weighed 8 pounds 8 ounces at birth and never had a complication in life.” @SugarFreeSweety

"No shaming, but ultrasound scans are stressful. Need to remember to enjoy seeing little one instead of just focusing on how I feel like I’m going to an exam. Also, I know plenty of non-diabetic people who’ve had babies larger than 9lb.” @AmyLCrees

"I had the shock of how ‘tiny’ she was for a ‘diabetic’ at 6lbs. She was a tiny and very skinny baby but the shock was made clear. However, during pregnancy, I was told to not buy newborn clothes as she would be too big. Needless to say, none of the 0-3 stuff fit her for ages.” @GFadventureer

"My daughter was 9 lbs and 21 inches. People mostly wondered how she fit. My abs were really tight back then (at 21), and I was so small, Drs thought she'd be 4lbs. I was actually given a ton of crap for being tiny. I was given extra growth scans, and someone tried to have a stern talk with me about anorexia (definitely didn't have anorexia).” @Emmerbetic

"Mine was 9lb 7oz, I felt guilty because I felt I hadn’t given her the best start.” @GreenRocketFood

"Not shamed, per se, but I was definitely sensitive to comments about my ‘big’ babies. They were 8.3 and 7.10! Each born a couple of weeks early but the hospital peanut gallery didn’t know that. My docs never made me feel bad - we just kept working toward healthy babies!” @Lindsey_VW

"Yes, from family mainly. Weight seemed to be the biggest concern in clinic too despite HbA1c being in range and few highs. Have to admit to being a little bit gutted she was 8lbs 10oz as I really wanted to prove them all wrong.” @KatyBowers87

How Can We Change This?

Provide healthcare professionals with a better education on the fact that just because a woman with diabetes is pregnant does not mean she can achieve non-PWD, perfect blood sugar levels with more “effort” or “self-discipline.” We will always be lacking the sufficient number of hormonal “tools” we need in order to replicate a system within our bodies that were designed to manage itself on a 24/7 basis. 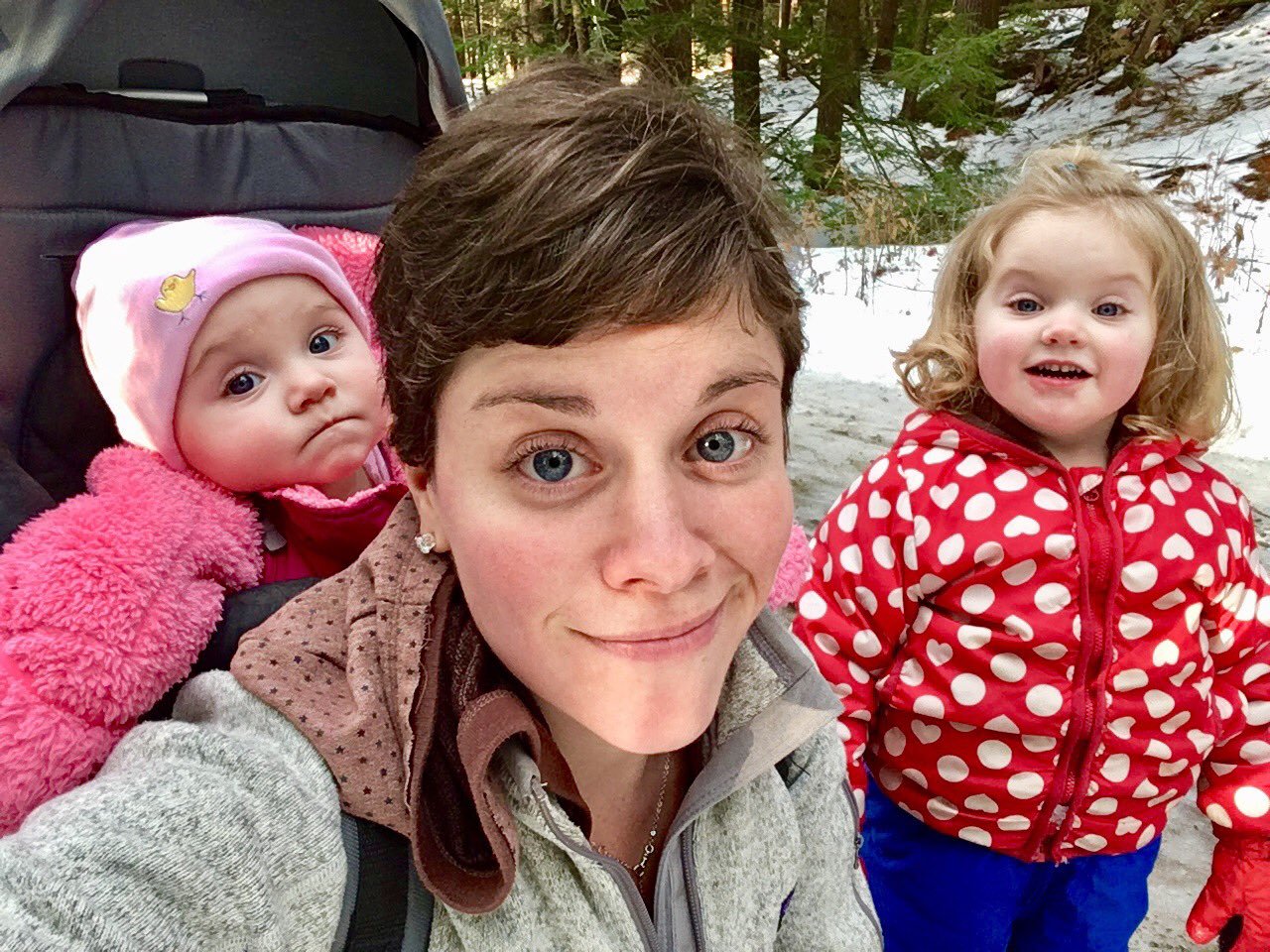 Encourage healthcare professionals to use more supportive language when discussing the risks and consequences of high blood sugars during pregnancy. Instead of lecturing or scolding when a pregnant woman is struggling to reduce her A1c, ask her where she feels like she’s struggling and what aspect of diabetes management is feeling the most challenging. Every patient with diabetes already knows their blood sugars aren’t perfect and they pose a threat to their child before they’re even born. Increasing that stress and pressure with fearful lectures isn’t going to help. Give credit when credit is due! If a woman with diabetes achieves an A1C under 7.0 percent during pregnancy, she deserves a pat on the back. There’s no way any healthcare professional can understand just how challenging that achievement is unless they actually have diabetes, too. Help us by focusing on the achievement so we feel even more supported and empowered to continuing giving our diabetes management that incredible amount of effort. After our child is born, let us love them -- and be honest about the reality that 95 percent of babies weigh up to 9.5 pounds! Why continue lecturing and scolding after the baby is born? Why immediately assume that our baby is big just because of diabetes even if they weigh well within the average range? Every time we’re told our baby is “big,” that translates in our head as: “You’ve done a bad job, mom.” Just let us love our babies! Respect your patient. We didn’t ask to have diabetes. And we’re doing everything we can to ensure it poses the least risk possible to our growing baby in utero. We deserve to be treated with as much respect, kindness, and thoughtfulness as any other mother-to-be. Being pregnant with any type of diabetes is an incredibly challenging undertaking and requires a great deal of courage and daily persistence. The fact that women with all types of diabetes can and do pursue pregnancy today should be celebrated and supported.